“Only logistically, Brexit is a nightmare”

The Belgian pork industry has taken a serious hit in the Asian market, following the discovery of the ASF virus in its wild boar population. Now Brexit can pile up losses for exporters as a no-deal scenario takes shape, considers Joris Coenen, head of the Belgian Meat Office.

“Only logistically, Brexit is a nightmare”

The Belgian pork industry has lost access to several markets in Asia due to the presence of the African Swine Fever (ASF) virus in its wild boar population. That affected trade of Belgian pork, with only two countries lifting the restrictions on the basis of regionalization. Losses have been registered for Belgian pork producers, as Mr. Joris Coenen stated in an interview for Euromeat News, but they could go even higher in case of a no-deal Brexit, considering the fact that the UK is the fifth-largest market for Belgian pork.

What is the current status of ASF outbreaks in Belgium and how much biosecurity measures have improved in the last 12 months?

Since 13 September 2018, the 1st outbreak in wild boar in Belgium, a total of 827 wild boar have been tested positive for the ASF virus, all in the current restriction area (Zone II). No domestic pigs were affected.

Belgium was prepared and implemented a wide variety of measures, both local in the infected zone as nationwide, to prevent the disease from spreading further.

Belgium’s approach proves to be successful. An ongoing surveillance programme both in domestic as in the wild population outside the restriction area has shown no positive cases. The observations show the effectiveness of the measures taken as

During the summer, in July and August, only 3 cases were confirmed, despite an ongoing search programme. All positive samples were from within the infected zone.

For the pork industry in your country the disease, even if reported only in wild boars, has been a serious hit. What are the consequences after one year and what solutions have been found to support producers?

Although there is no ASF found in domestic pigs and pig meat, trade of Belgian pork is affected, as some countries put heavy restrictions on the import of pig meat from Belgium. Especially the export to Asian markets fell drastically. So far, only 2 countries lifted the restrictions and are back open on the basis of regionalization. As a result, producer prices in Belgium are suppressed and losses accumulate to date. 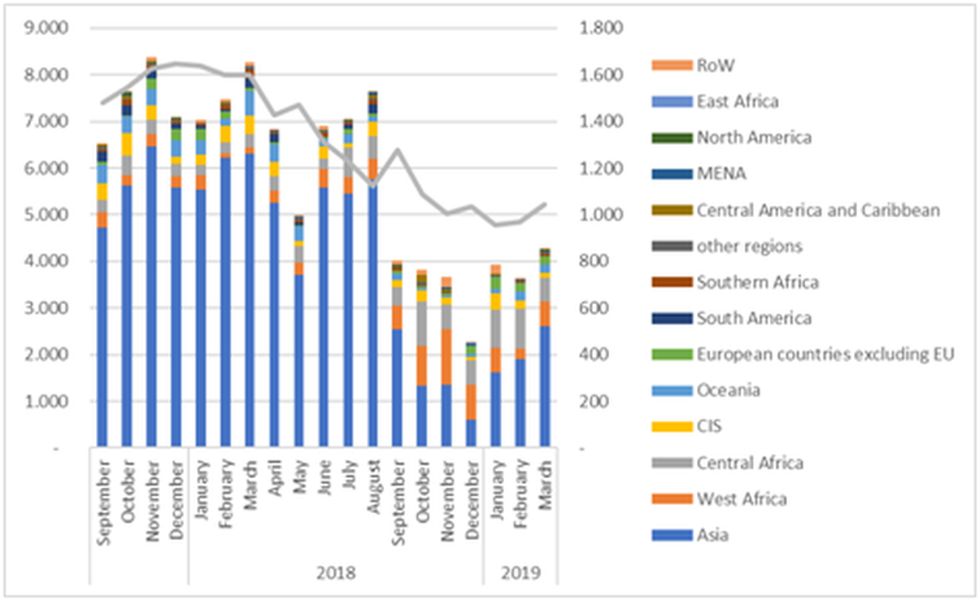 What are the main markets fort pork exports in 2019?

Belgium’s main markets lay within the European single market. The trade within the Union has not been affected, as the infected area is located in an area where almost no pigs are kept.

Germany, Poland, and the Netherlands remain Belgium’s main trading partners, followed by the Czech Republic and the UK.

How focused are the Belgian pork producers on the SE European markets, considering the current situation in Romania, Bulgaria, Poland and the Republic of Moldova, and what are the advantages that pig meat processors in those countries will have by working along with Belgian partners?

How much the ASF situation has affected the pork prices in the domestic market?

It is estimated that the pig producer price has been suppressed by anything between 1 and 10 ct/kg as a result of export restrictions. But in meat prices, the image is more complex, as it depends on the cut, the specifications, etc.

Focusing on beef in the last 12 months has improved the performance of the sector? How many new markets did you open for beef in 2019?

Much the same as with pork, Belgian beef is traded mostly within the EU. New markets are opening, however, mainly in Asia, f.e. Vietnam. So far, the volumes to these markets are still very low. The Belgian Blue race, the showpiece of the Belgian beef sector, is very popular in the neighboring countries of Belgium (the Netherlands, Germany), but still has to find its way further abroad.

With a major shift in meat consumption foreseen in the Asian markets do you think the Belgian beef industry will play a more important part in meat exports in the future?

The largening middle class in countries such as China and a widening diet is the main reason for more beef consumption in Asia. ASF will also play a role, as shortages are foreseen in the pork supply.

What are the best selling products abroad and how is the Belgian meat sector performing so far in the international markets?

Fresh pork and beef are the main Belgian meat exports. The Belgian meat supplier has a reputation for being able to tailor his offer to his client’s needs. In meat, where so much craftsmanship is involved, that’s surely an advantage.

What do you foresee for the European pork industry in mid-term, considering the ASF risk present in Central and Eastern Europe and what is the worst scenario taking into consideration by the Belgian Meat Office?

ASF is a threat to us all. In the wild population, it will be hard to control, especially in Eastern Europe.

But it’s of paramount importance that we keep biosecurity levels up and keep the disease out of our stables. What matters is we keep it out of the meat and we are determined to do so.

To what extent Brexit will have an impact on Belgian meat producers and how do you plan to respond in case of a no-deal Brexit?

A no-deal Brexit is pernicious for trade, and so for the Belgian meat exporters. The UK is our 5th market and close enough to supply even several times a day. Only logistically, Brexit is a nightmare. We hope this worst-case scenario still can be avoided.

US beef, pork exports slowdown in May

U.S. beef and pork exports trended lower in May, due in part to interruptions in slaughter and pr...

A group of experts from the UN' Environment Programme and the International Livestock Research In...

Ukrainian livestock is down this year on every sector, according to the State Statistics Service....