The event that took place in Alba Iulia, Romania had a more spectacular format than its first edition. The next project will be GRILLFEST, announced the organizers.

CARNEXPO Grill 2021 was a real gastronomic show, a dynamic event in which top chefs in Romania held a series of culinary shows, with an emphasis on promoting local products.

The second edition of CARNEXPO Grill was even more spectacular than the first one, held in 2020, gathering the most important companies in the meat industry, HoReCa and retail, which met at the luxury resort Theodora Golf Club, between 10-11 June.

“Our duty, of all, is to promote Romanian local products and to identify complete solutions for the meat industry, HoReCa and for retail. We are going through a difficult period for the HoReCa sector and, through this event, we want to prove that we are all strong and ready to develop and promote Romanian gastronomy", said Eugen CAPRA, General Manager of CARNEXPO Grill.

The new event format, held for the second consecutive year in a top location in Romania, had the role of establishing new connections between participants, but also to present the meat in a modern way, in the form of interactive culinary shows. At this year's edition, METRO was the main supplier of ingredients for chefs who held demonstrations at CARNEXPO Grill, providing participants with complete solutions for the dishes they cooked: fresh and frozen fish, meat from their own production unit but also a variety of METRO Chef products, a mark developed for specialists in the hospitality industry.

CARNEXPO Grill was a B2B event, where specialists in the meat industry, HoReCa, retail, equipment suppliers, had the opportunity to share their ideas, know-how and lay the foundations for new partnerships.

The chefs presented different techniques for cooking Romanian meat, using modern grills, smokers, ovens and hobs, and the guests had to choose, depending on the type of meat preferred: poultry, pork, beef, sheep, fish and, as a novelty, buffalo meat. The organizers of CARNEXPO Grill support the fight against food waste, so all the surplus food cooked during the two days of the event was donated to disadvantaged people.

"In the last 15 years, together with Eugen Capra, the initiator of CARNEXPO Grill, we have laid the foundations of several projects, including the specialized magazine INDUSTRIA CARNII.RO, AgroFood, EuroMeatNews.com, the INDUSTRIA CARNII.RO Yearbook and the CARNEXPO trade fair. Besides these important projects, our future will be GRILLFEST - the first meat festival dedicated to Romanian consumers ", said Dorinel NICULAE, Project Manager CARNEXPO Grill.

The GRILLFEST concept was launched within CARNEXPO Grill, and the launch included a premiere for the Romanian market - the realization of the burger worth 1,000 euros, under the signature of Chef Iulian Olaru, former 'Chefs la Cutite' competitor. Golden Burger was made from premium ingredients: Romanian Black Angus beef, black and gold caviar produced in Romania, buns, cheeses and vegetables of local origin, and was decorated with gold leaf. In the end, Chef together with the organizers cut the big burger with a sword and offered it to the spectators for tasting. 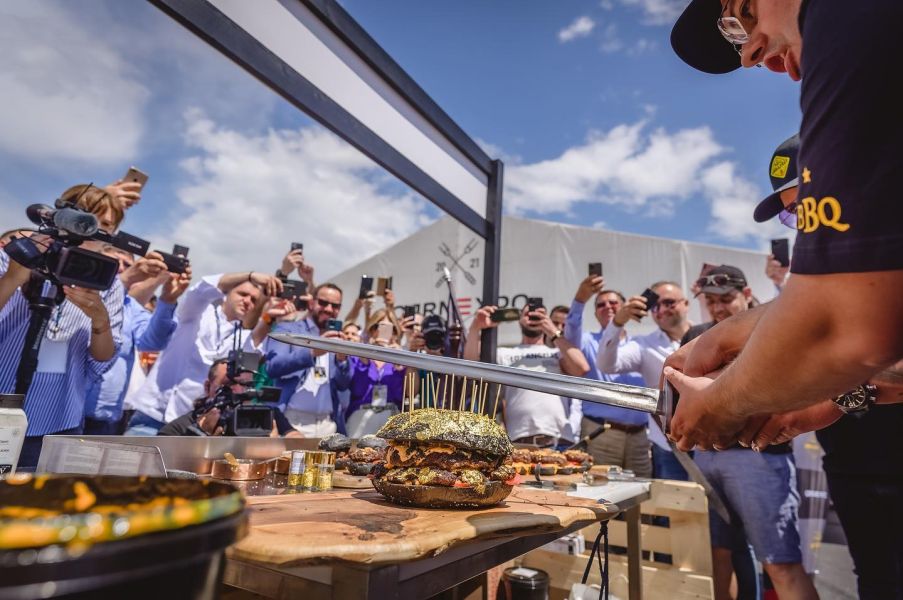 The organizers set out to make the GRILLFEST event the largest festival dedicated to meat and gastronomy in Romania. The essence of the festival is the passion for barbeque, to which are added product presentations, street food, live cooking sessions held by famous chefs. GRILLFEST is a project that will be supported by a number of entrepreneurs in the meat, HoReCa and retail industries.

CARNEXPO Grill 2021 was an exceptional edition, with many surprises for participants, in terms of partnerships concluded by CARNEXPO Grill with the National Association of Cooks and Confectioners in Tourism (ANBCT), the Association of Italian Chefs, the Culinary Institute Disciples Escoffier, the organizers of „D`ale Porcului Festival ” (who made live demonstrations of pork preparation) and the representatives of „Fratia Ceaunelor”. An important moment at CARNEXPO Grill was the festive dinner offered by Solina, partner of the event and the main supplier of spices and food ingredients. The dishes were prepared by a team of chefs coordinated by Chef Dragos Bercea.

For this year's edition, the CARNEXPO Grill promoters have joined forces with HoReCa specialists to launch strategies aimed at developing Romanian gastronomy and to support Romania's national senior and junior teams. Within CARNEXPO Grill 2021, the National Association of Chefs and Confectioners in Tourism (ANBCT) made available all its knowledge for the realization and promotion of Romanian products.
After two successful editions in Romania, the organizers of CARNEXPO Grill are preparing a new top edition, the first international format of the event, which will take place between June 24-25, 2021, at Castel Mimi Winery in the Republic of Moldova.

Garra International will be exhibiting at SIAL Paris

This year’s 21 winners will come together in a dedicated area of the exhibition between Oct...

The presence at the exhibition is very important for the company's development, as Armen Meserlia...

Pigs control their living environment through their own behaviour

Germans want to continue eating sausages and hams in the future

Marel: Offals around the world