Beef+Lamb NZ is activating its contingency plans for hard Brexit

Under the new regulations, NZ sheep meat exporters can send to either the UK or the EU-27 a new maximum of 114,000 tonnes each before tariffs kick in. While the quota remains the same, the value will be affected.

Beef+Lamb NZ is activating its contingency plans for hard Brexit

New Zealand sheep meat exporters are preparing themselves for the impact of no-deal Brexit and have started working on the contingency plans under this scenario. After the EU parliament last week approved regulations for splitting quotas for third countries selling to the EU after the UK goes, New Zealand's Meat Board has started to make changes to the software used to run the quota certification systems. The current quota of 228,000 tonnes tariff-free of sheep meat is going to be split in half between the EU and the UK.
While for a neutral observer it may seem like a fair deal, meat exporters in New Zealand are concerned about the possibility to end up captive in the British market that could get flooded by domestic production any time after 29 March. 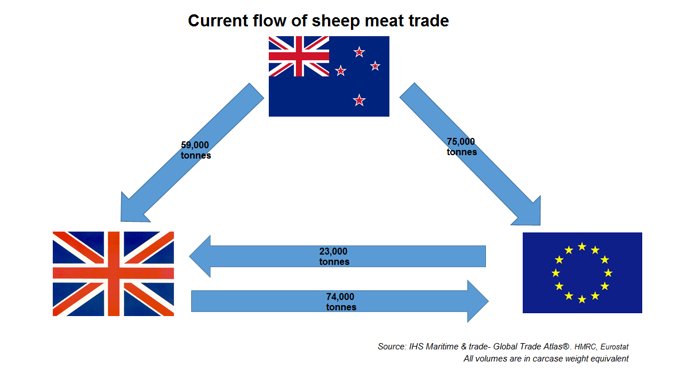 Dave Harrison, General Manager, Policy and Advocacy at Beef + Lamb New Zealand and former Regional Manager for Europe, believes that the exports are in danger due to the lack of flexibility and the exporting companies will be disadvantaged. "They end up with a certain amount of quota into a market which they do not operate in and not enough in the market they do. In the event that there is no deal and all of a sudden the UK has 70,000 tonnes of carcases that it can’t move to France any more then that is a real problem and it is going to create a market situation where flexibility is going to be really important", explained Harrison, according to Farmers Weekly magazine.
Currently, 55% of the sheepmeat exported by New Zealand in Europe is consumed in the EU 27, while 45% ends up in Britain, according to official data.

The first shipment of Namibian beef has been sent this week to the United States after 18-years o...

Beef consumption in Argentina has dropped to the lowest level ever recorded in the South American...

Third US pork producer to denounce ractopamine use

Vall Companys breaks the ceiling of €2 billion in turnover