The situation reflects declining prices on all types of meat, supported by widespread import restrictions from many importing countries due to pandemic-related economic recessions, collars of transportation bottle and the limitations of foreign reserves.

FAO's meat prices index fell last year due to widespread import restrictions from many importing countries due to pandemic-related economic recessions, collars of transportation bottle and the limitations of foreign reserves, reports the UN Agency in the latest meat market review.
International meat prices, measured by the Meat Price Index of the Food and Agriculture Organization of the United Nations (FAO), averaged 95.5 in 2020, a decrease of 4.5 points (4.5%) from 2019, reflecting price declines across all meat types. Widespread import curtailments by some 14 out of the top-20 meat importing countries due to economic downturns, transport bottlenecks, or increased domestic availabilities were primarily behind the overall price decline in 2020.
Severe foreign exchange limitations due to reduced inward remittances, shrunken tourism-related revenues, and weakened export incomes further reduced meat purchases. Notwithstanding these reductions, global meat imports rose in 2020, driven by China’s year-on-year escalation of imports, which rose by as much as 57.6% to 11.7 million tonnes. Pig meat imports rose the most due to the ASF-induced pig meat deficit and the government purchases for replenishing public stocks. These increased imports did not translate to higher world prices as most exporting countries faced excess supplies, caused by reduced food services sales and lower internal demand because of pandemic-related lockdowns and economic hardships. 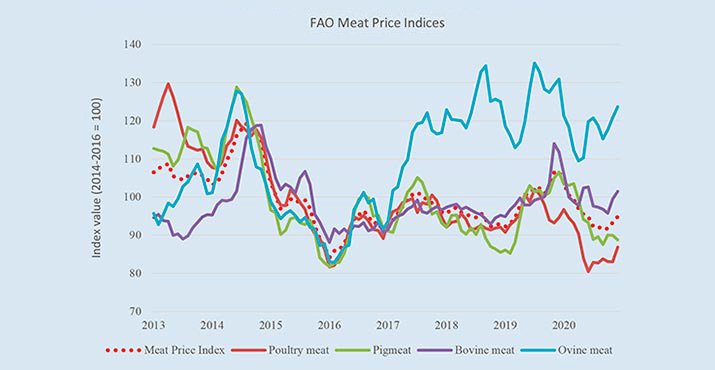 The annual average indices of all meat products that constitute the index fell in 2020. Poultry meat prices declined the most (-9.8%), followed by ovine (-5.7%), pig (-3.6%) and bovine (-1.4%) meats. The annual average poultry meat prices per tonne declined from $1,374 in 2019 to $1,239, primarily as export availabilities exceeded global demand, partly reflecting the continued production increases worldwide, adding to already high export availabilities. Some producers, such as Brazil, even lowered production in the wake of high feed costs, market uncertainty, and weakening prices, but overall global output declines were insufficient to contain the price slide. Similarly, avian influenza outbreaks in European countries reduced production, but the impacts remained small. The average annual pig meat prices fell from $2,290 in 2019 to $2,209 per tonne in 2020, a decline of 3.6%. Increased import demand, mainly from China, was insufficient to balance a slump in imports from other countries, caused by COVID-19 related economic hardships, logistical bottlenecks, and a steep fall in demand from the food services sector. Increased export availabilities in major producing countries also contributed to the price decline, despite prolonged plant shutdowns and slaughtering and processing delays in many producing countries, say the market review.

The director of the interprofessional of sheep and goats (Interovic), Tomás Rodrígu...

China has reached an all-time high in pork imports last month buying 460,000 tonnes from its supp...