23 million tonnes of pork produced in the EU last year

The figure shows an increase of 1% compared with the volume reported for 2019.

23 million tonnes of pork produced in the EU last year

The total pig meat production in the EU, for 2020, stood at 23 million tonnes, 1% higher than a year before, announced Eurostat. Spain showed a notable increase in production for the year, up 8% year-on-year to 5 million tonnes in 2020. Strong demand from Asia has likely influenced production growth, which has further widened the gap in the rate of expansion between Spain and other major European pig producers. Denmark also grew 6% year-on-year, totaling 1.6 million tonnes for the year. However, that may be a result of a fall in demand for live pigs in German abattoirs due to the COVID-19 outbreaks that halted activity in some of the country's largest slaughterhouses. 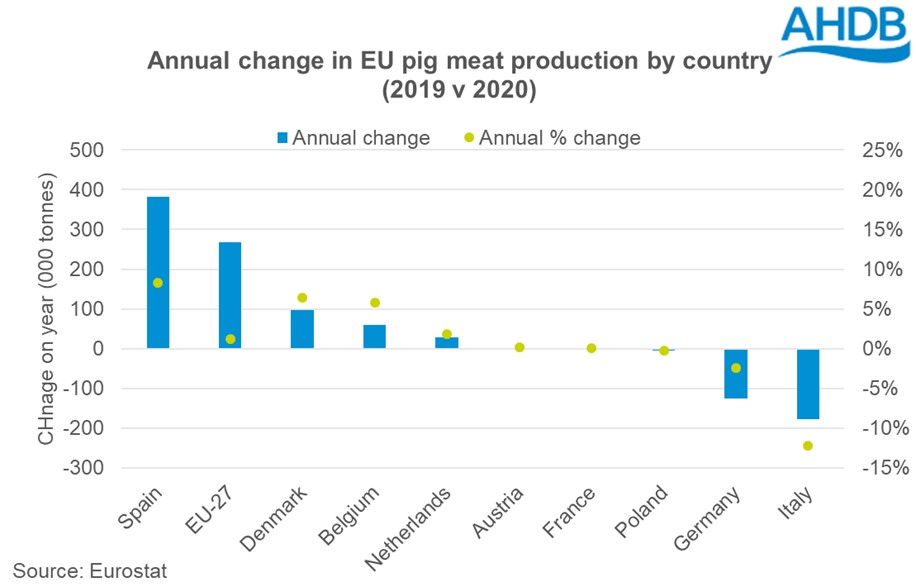 "Conversely, production in Germany, the EU’s largest producer, fell by 126,000 tonnes (2%) to 5.1 million tonnes for the year. This is unsurprising considering the outbreak of ASF in the country, COVID-19 related challenges, and a contracting herd in recent years. Italian production also declined by 12% (177,000 tonnes) compared to the previous year," commented Brownyn Magee, AHDB analyst.
Looking forward, the total number of pigs in the EU-27 increased in December, with most of this increase coming from fattening pigs. "This could lead to a lift in EU production in the first few months of 2021. Although, a marginal decline in the breeding herd could still point towards a more stable production in the medium term if continued increasing sow productivity is considered," Mrs. Magee added.

Poultry production in Brazil is going to slow down this year as production costs are getting high...

Tyson invests in US CattleTrace system

Tyson Fresh Meats, a Tyson Food subsidiary, announced its support for US CattleTrace, by that bec...