Last year, the growth in the global market was 2.09% and countries in the Asia-Pacific region are expected to secure a CAGR of 2%.

The duck meat market could grow by $1,3 billion over three years, according to market researchers from Technavio. Last year, the global market for duck meat expanded by 2.09% supported by increased demand from APAC countries such as China, Japan, and Malaysia. 80% of the market’s growth originated from APAC in 2019. Factors such as increasing health awareness, the convenience offered by processed meats, and the expansion of fast-food chains are driving the growth of the market in APAC. according to the analysts, market growth in this region will be faster than the growth of the market in the Middle East and Africa. Based on the product, the market saw maximum growth in the fresh duck meat segment. 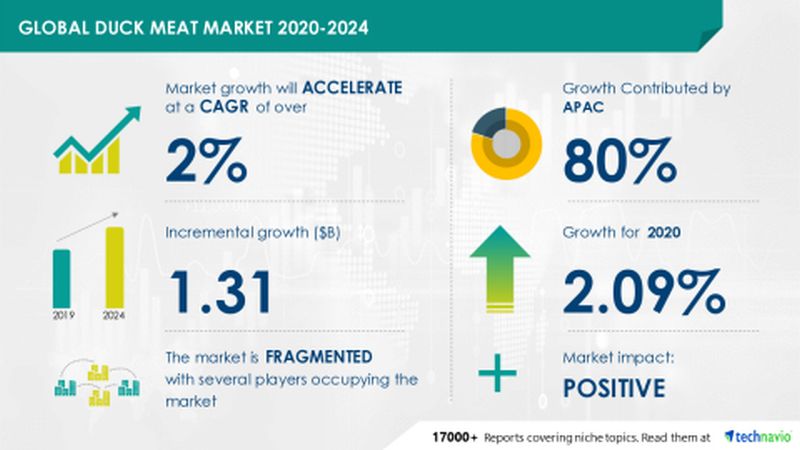 The segment is driven by the rising awareness about the health benefits associated with the consumption of duck meat and the expansion of production capacities by vendors.
Technavio estimates the global duck meat market to grow by USD 1.31 billion, progressing at a CAGR of over 2% during the forecast period. The market is driven by the increasing global production of duck meat. However, the increasing popularity of the vegan diet might challenge growth.
At the same time, this segment of the poultry industry may also be impacted by an unexpected development in cultured meat production. In France, a company named Gourmey just raised $10 million from private investors in a bid to develop lab grown foie gras. This foie gras is not made from force-feeding geese until their livers become horrifically engorged. This kind is being grown cruelty-free in a lab using stem cells taken from duck eggs.
"In the egg, you have stem cells and they have the capacity to divide and multiply indefinitely, as long as they have a good environment. We isolate them from the egg and give them a controlled environment that replicates the egg’s environment,” explained Nicolas Morin-Forest, co-founder and CEO of Gourmey.

The cells are fed on the same nutrients that a duck would be given — proteins, amino acids, lipids. “The cells multiply as if they are in the egg, then you adjust the nutrients to trigger the cell type that you want. So if you want liver cells, or muscle cells, you adjust the inputs and the cells react to that. We then harvest muscle cells, fat cells, or liver cells and craft our products,” he added.
The startup decided to focus on this gourmet product due to a ban placed in several parts of the world for traditionally crafted foie gras and, of course, the price of the product. Gourmey's CEO believes that soon any kind of poultry meat can be produced in the labs thanks to this technology. Currently, Singapore is the first country in the world to put lab-grown chicken meat on the market. Other parts of Asia are advanced in drawing up regulatory frameworks, as is the US.
However, in the EU foods need to be proven to be safe before receive the OK to enter the market. This is a process that may take up to five years to offer a clear result on how safe are these types of products for human consumption.