All have been reported in the wild boar population in the regions of Piedmont and Liguria.

After two months since its first ASF outbreak, Italy has now 66 cases reported in two regions: Piedmont (38 cases) and Liguria (28 cases). So far, the disease has been found only in the wild boar population but new measures are prepared by the local authorities to stop the virus from spreading.
The President of the Piedmont Region, Alberto Cirio, approved this week an order with new urgent and specific measures to depopulate wild boar populations, monitor the presence of ASF and guarantee biosecurity in the infected zone, the active surveillance zone, the proximal free zone and the distal free zone.

As an exception to the legislation, wild boar selection hunting can also be carried out at night, provided that night vision equipment is used to facilitate the selection of identified animals.
The measure is valid throughout the region and expires on June 30. In the infected zone and in the active surveillance zone, the application of the measures is a priority and urgent and the depopulation measures must be carried out immediately and with the greatest possible intensity in the three months following the entry into force of the order.
Similar measures have been adopted in the past by Poland, Romania and Germany and the main result was a migration of wild boars to regions where the herds felt safe. Italy and North Macedonia were the latest European countries to report ASF outbreaks but the disease is also present in Poland, Romania, Serbia, Bulgaria, Greece, Hungary, Slovakia, Germany, the Baltic states, Ukraine, Belarus and Russia (see map below). The Czech Republic and Belgium were the first countries to regain their ASF-free status from OIE. 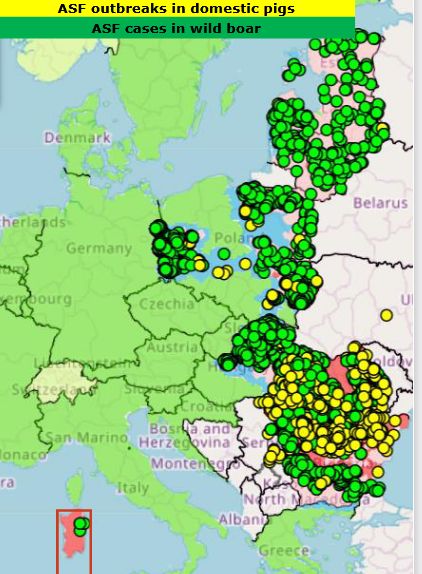 Food security may be at risk in Poland and the rest of the EU member states as a revised EU Direc...

So far, 2022 has been a challenging year for exporters around the world, and these challenges hav...

Sheep exports from Australia banned for some months

US animal protein market expects another rise in prices

INTERPORC is working with GLOBALG.A.P. in order to reinforce the IAWS certification