Top five markets are comprising China. the US, Japan, Mexico and South Korea.

Canadian pork exports in the first three months of 2021 have increased by 2%, according to statistical data. China was the main destination, accounting for 44% of the exports, followed by the US, Japan, Mexico and South Korea. In terms of volume, Canada exported 358,000 tonnes of pig meat, offal included, worth more than $1 million.
Production has also increased by 1.4% compared with the same period last year and that may add a surplus in the international market. Farmgate prices have been rising continuously since the beginning of the year reaching an average of $204/100 kg liveweight at the end of last month. 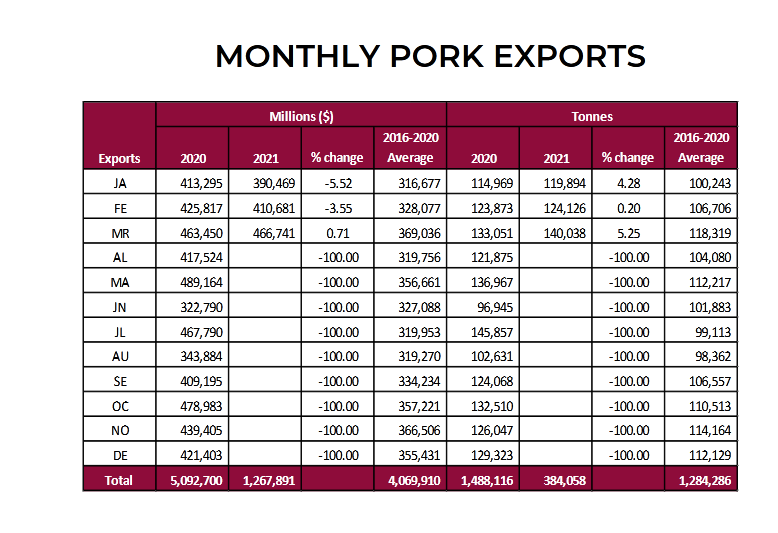 Imports from the EU have dropped 72% during the first quarter of the year, with only Austria and France delivering both 33 tonnes of pork in this market. Currently, Canada has a Trade Continuity Agreement signed with the UK, which allows tariff-free access for about 5,000 tonnes of Canadian pork products this year in the British market and an FTA signed in 2017 with the EU. "Canada has so far not made much use of the EU (or UK) quotas available, with technical barriers likely limiting the viability of trade. The details of any enhanced trade agreement we may reach with Canada in the future will determine whether trade volumes are likely to increase," mentions Charlie Reeve, Livestock Analyst for AHDB.

hina's official channels are predicting a full recovery in the national pig inventory for this ye...

KORUS Consulting has completed a project to streamline the supply chains of Cherkizovo Group, the...

Poultry, the most consumed animal protein in the UK is a threat due to a large labour crisis, acc...

The ‘Olympics of Butchery’ is back on