However, trade barriers in some markets are expected to remain active, says a USDA report.

Brazil is expected to set another record in chicken production and exports in 2020 despite current uncertainties surrounding the impact of Coronavirus (COVID-19), say a USDA report released this month. According to the report, the increase in production is 3.2%, reaching a volume of 14.1 million tonnes, of which 4.1 million tonnes will go to export. The main driver is a steady demand for chicken meat in international markets, mostly from Asia, but also from other traditional Brazilian markets, due to the combination of outbreaks of African Swine Fever (ASF) and Avian Influenza in Asia and other parts of the world. Domestic demand is also projected to increase due to ongoing economic growth, although at a lower level than initially projected, said the report. Last month, according to the Brazilian Association of Animal Protein (ABPA) data, Brazil has exported 384,400 tonnes of poultry in February, up by 10% from the volume exported in February last year. 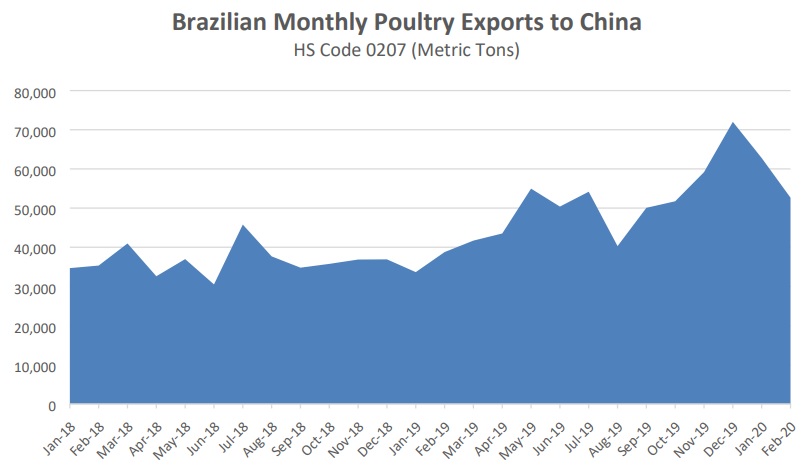 China accounted for 17.5% of the Brazilian chicken meat exported this year and there are certain signs of increasing competition between Asian countries for poultry imports. South Korea was the destination of 17,500 tonnes in the first two months of this year, a number that exceeds sales by 12.5% in the first two months of last year. The Philippines increased their purchases by 104%, with 14,700 tonnes, while Singapore increased its Brazilian poultry imports by 49%, with 18,300 tonnes between January and February.
"Asia has consolidated itself as the main destination for imports of chicken meat from Brazil. This is a favorable fact, especially when we find that the average price practiced in sales to this region of the globe is higher than the general average of exports," pointed out Ricardo Santin, ABPA's executive director.

China is still expected to support the increase in Brazilian poultry exports but there are signs that even the domestic demand will jump by 2% this year, holding 10.1 million tonnes of chicken meat in the Brazilian market. Also, consumers are expected to switch from beef to chicken and pork due to high beef prices. One of the first signs was seen by increased egg consumption in the last couple of months.
Nevertheless, Brazil has to overcome some trade barriers in the future it is to increase the poultry export figures to higher levels. So far, some of those are meet in Suadi Arabia market, who placed a temporary ban on two Brazilian plants without any clear explanation, South African market, were higher tariffs are imposed for poultry imports, the EU, who hasn't redraw the ban placed on several Brazilian plants in 2018, India, a market who practices tariffs of 100% on chicken products and a 30% on whole chickens and Indonesia.

Denmark is relaxing requirements for large slaughterhouses that are extending the operating hours...

Tyson Foods announced it will pay approximately $60 million in “thank you” bonuses to...

Quality Meat Scotland (QMS) warns about a possible shortage of low-value beef products on the Bri...