The sharpest decline to be seen in Northern Europe, while Romania and Spain will continue to invest in the sector.

Over the next 5 years, EU pork production is expected to drop by 3%, according to the latest forecast from the French Pork Institute (IFIP). The report mentioned that pig production in the EU-28 reached a record level in 2020 with 24.2 million CWE (carcass weight equivalent), an increase of 1% compared to 2019. Nevertheless, Jan Peter van Ferneij, IFIP economist, predicts a decline in pig production for the next 5 years.
Pig production in EU-27 is to drop 3% by 2025, says the IFP economist, although heavier carcasses will compensate in terms of meat output. "In 2025, European supply will be almost 750,000 CWE lower than in 2020", forecast Jan Peter van Ferneij.
In his opinion, two of the member states, Spain and Romania, will continue to invest in the sector. Last year, Spain reported a production of 5 million tonnes, which means that the country produces twice what it consumes; the rest is exported. Since 2019, Spain has been the main exporting country to third countries and is marked by its impetus of conquering markets internationally. The increase in the sow census and the increase in carcass weight lead to a growth of around 2.5% in 2021, making Spain the leading producer in the EU. By 2025, the number of slaughterings would exceed 60 million pigs, an increase of 9% compared to 2020. 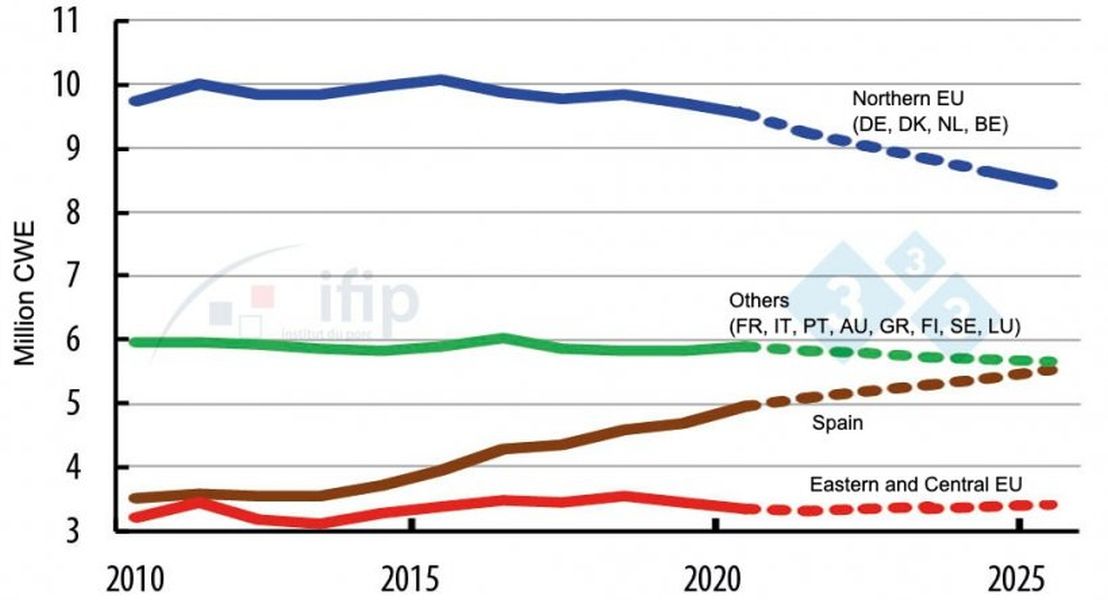 In Romania, high dependence on imports (more than 70%) is going to encourage large companies to invest in the sector, as the country, despite the ASF crisis, has assets favoring pig production: cereal production potential, a population of more than 18 million inhabitants within a 1000 km radius, and available labor. "After years of declines, a 25% increase in Romanian production by 2025 looks feasible", commented Mr van Ferneij.
According to IFIP estimates for 2025, Germany, the Netherlands, Denmark, and Belgium together will produce 11% less than in 2020. Animal welfare and environmental regulations, social pressure on farms and the pig industry, as well as the lack of generational succession, are causing a drop in production in these four countries. The sanitary crises due to COVID-19 and ASF are accelerating an already visible drop in production in 2021.

In the rest of the EU, production will slowly decline by 4% by 2025 relative to 2020. France will be close to this average. The lack of new generations continuing in production accentuates the decline. The decline in per capita consumption will continue but will be offset by population growth in the EU.
Also, dependence on EU exports to third countries grows with Brexit. The United Kingdom, an importer with more than 800,000 tons in 2020, became a third country in January 2021. Uncertainties continue about maintaining flows to the UK but also to Asia, both in terms of product volume and value. The United Kingdom could turn to other suppliers, particularly on the other side of the Atlantic. By 2025, China, the main market for EU pork exports is expected to restore pork production.

The director of the interprofessional of sheep and goats (Interovic), Tomás Rodrígu...

China has reached an all-time high in pork imports last month buying 460,000 tonnes from its supp...